The Durga Opera was created by my sister, Sangita Lakhanpal, in collaboration with the composer and producer, Kuljit Bhamra and myself.

While the overall structure of the narrative takes creative inspiration from the Devi Mahatmya, a centuries old mythology celebrating the Goddess in India, our shared intention is to connect the power of myth and mantra to our current times.

And as our world burns, I hope you will take a moment to listen and share this album. You can listen on Spotify, Amazon Prime, and Apple Music and other digital platforms.

I am sharing the text of the narrative, the mantras and their translations below.

May we learn to live in reciprocity and love with our beautiful home.

For millennia, humans have called on the divine in times of trouble. And for millennia, the great Mother has always heard our call.

This is the story of a time when the great Goddess Durga came to our aid.

Of a time when the gods and goddesses combined their powers to invoke Mahadevi, the supreme one – to vanquish the evil that was destroying the earth.

This is the story of the ten–armed Goddess, who, on the back of a lion, rode onto the battlefield of arrogance and greed and destroyed our inner demons with love and compassion.

This is the story of rebirth.

And as the earth burns and our oceans rise, as the forests disappear and our rivers die. As greed rules and tyrants proliferate, it is time once again to call on Durga.

It is time once again to ask the Goddess to save us from ourselves.

Invocation to the Divine Creator

Through great effort and immense austerities, the demons called upon the gods to grant them unbeatable power.

Ong Namo Guru Dev Namo – we call upon you the creator, you the divine to give us our desire.

After thousands of years, Brahma heard their call and granted them their wish.

“You will never be vanquished in battle by a man.”

Intoxicated with power, the demons led by Mahesasura, went on a rampage.

Arrogance, avarice and aggression spread across the land.

The earth burned and the oceans rose, the forests disappeared, and the rivers died.

The fires raged out of control, and the gods and goddesses were aghast.

Looking down at their precious jewel they knew something had to be done. Balance must be restored.

Combining their powers, the trinities invoked the primordial source of all creation – the Great Goddess, Durga.

Our creation is guru Brahma-the force of creation; the duration of our lives is guru Vishnu-the force of preservation; all that happens to us and the death of our body is  guru Shiva or Maheshwara-the force of destruction or transformation. There is a guru present and visible to us (Guru Sakshat) and a guru that is beyond and transcends all (param Brahma). I offer myself to the (tasmai) to the beautiful (shri) remover of my darkness, my ignorance; (Guru) it is to you I bow and lay down my life (namah).

OM is the universal resonance and source of energy which is all encompassing and ever flowing. Ayim is the energy of resonance and sound, which emerges from OM. Shreem – shree is Vishnu’s partner and symbolizes all forms of abundance. Hreem – Hree is Brahma’s partner and represents learning and wisdom as Saraswati.  Kleem is the consort of Lord Shiva in the form of Durga/Kali – the Goddess the fierce protector and guardian of all.

Om is the universal sound vibration of all creation.
Dum is the seed sound of Durga energy.
Durgayei is the formal name for the goddess.
Namaha is a salutation – “I bow to you.”
Om Dum Durgayei Namaha can be translated as Salutations to the one who bestows compassion, courage and patience. Bless me with your protection and love. 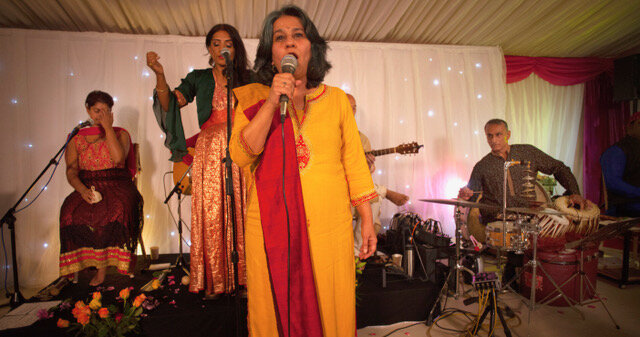 Hearing the calls of the gods and goddesses, the Goddess Durga arose in her magnificent splendor.

Fierce and beautiful, she filled the universe with her radiance.

Oh Universal Mother Durga!
Awaken us from the slumber of ignorance.
You are Mother Gauri and the valiant Chandi Devi.
Awaken us to the inherent atomic reality,
The beauty of the presence of Lord Shiva

Mounted on her mighty lion and Dazzling in her beauty, Durga appeared in the demonic kingdom.

We seek blessings from Mother Durga, who incorporates the forms of Saraswati (Giver of Knowledge), MahaLaxmi (Giver of Wealth), Mahakali (Giver of Justice), to give us the strength and energy to untangle ourselves from the knots of negativity from our mind and body.

Transfixed by her radiance and overcome by lust, Mahisasura began to salivate. “You are mine”, he roared.

Filling the sky with her laughter, Durga replied: “Vanquish me in battle and you can marry me.”

Shaking the earth with her majestic tread, the ten-armed Goddess prepared for battle.

She gathered the divine weapons of conch and discus, mace and plough, javelin and axe, bows and arrows, noose and sword.

As she climbed on to her lion, Durga’s adornments glittered like the sun’s rays.

Wielding her mighty sword, Durga dances through the battlefield. Missiles fly in every direction.

Billions of blood-thirsty demons on chariots, elephants and horses rush to conquer her.

And the Goddess serenely kills them all.

You who are all pervading in the four directions
Self-illumined, profoundly beautiful and united with all
Destroyer of torments, of birth and death.
Embodiment of mercy, Thou art ever within us.
Thou are the everlasting giver of indestructible power.

He stares at the luminous face of the Goddess.

She gazes back with love and compassion.

The Goddess chops off his head with her sword of truth.

She opens her arms and the demon merges back into her boundless body of love. 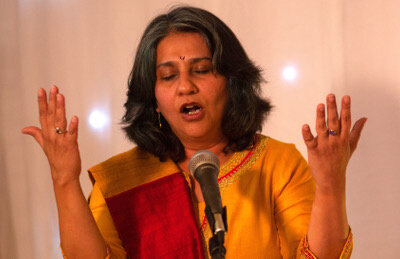 I am Durga
I am the victory
I bring harmony and balance.
I am the maker of all worlds and dwell within them.
My greatness lives in all things.

Ambe is a name for the creative power, Jagad means world. Jagadambe means the mother of the world.
Bhavani means the one who gives all things existence. Janani means she who gives birth
Glory to Mother of the Universe, Mother Bhavani
Glory to Mother Durga, Destroyer of Sorrow, Glory to Kali, Destroyer of Time
Glory to Uma Rama Brahmani Radha Rukmini Sita, manifestations of the Goddess.

Return to Love Truth and Bliss

As the love of the Goddess embraces the world, the earth is filled with peace.

Harmony and balance return and the songs of life begin again.

I bow to Lord Shiva.

OM – Out of the void of pure existence and vibrationless emerged the vibration of OM. And then the creation of the universe began.  Shiva is seen as primordial consciousness and in Siddha Shaivism and Shaiva Siddhanta Shaivism tradition, Namah Shivaya is considered as Pancha Bodha Tatva of Lord Shiva and his universal oneness of five elements. Na – Earth, Mah – Water, Shi – Fire, Va – Air, Ya – Sky or ether.

In other words, universal consciousness is one.

He who has the king of snakes as his garland and who has three eyes,
He whose body is smeared with sacred ashes and who is the great Lord,
He who is eternal, who is ever pure with the four directions as his clothes,
Salutations to that Shiva, who is represented by the syllable “na”